Source: Washington Post Real Estate By Michele Lerner (May 30 at 6:30 AM) 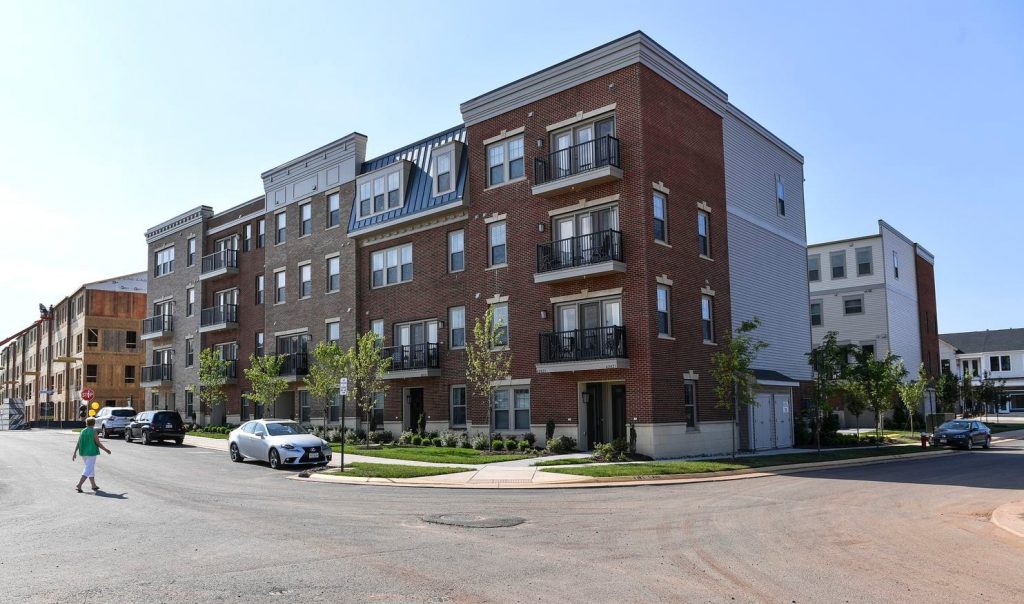 Janet Lynd walks to her four-story townhouse at the Lifts at Birchwood at Brambleton in Ashburn, Va. The 55-and-older community offers elevators in the units. (Ricky Carioti/The Washington Post)

James and Svitlana Harden, residents at the Crest of Alexandria community for people 55 and older, knew someday they would need to leave behind their multilevel townhouse in Alexandria, Va., for single-level living where they could age-in-place without worrying about climbing stairs. The couple never expected to move a half-mile and into another townhouse.

“After I retired from the Treasury Department, we wanted to move to a 55-plus community for the social life,” James says. “But when we looked at some of the developments along I-66, we knew the traffic would be too rough and we would be less likely to walk to places.”

The Hardens found a compromise that meets all their needs: a townhouse with an elevator in an active-adult community within walking distance of a grocery store, a gym, restaurants and a coffee shop.

The Crest of Alexandria has townhouses from Craftmark Homes and Van Metre with elevators, as well as single-family houses from Van Metre with first-floor master suites and condominiums from the Christopher Cos.

Townhouses with elevators are also available at Walhaven at Kingstowne in Alexandria from Miller & Smith and at Birchwood at Brambleton in Ashburn from Van Metre.

“I love having an elevator, even though I mostly just put my groceries in it and meet it on my kitchen level,” said Lynd, seen here in the elevator. (Ricky Carioti/The Washington Post)

Townhouses, although relatively rare in most active-adult communities, are appearing more frequently in the mix of housing for older adults in the Washington region.

Craftmark Homes plans to build more townhouses with elevators in 55-plus communities in Virginia and Maryland because they have been so successful at the Crest, says Lori Windsor, sales manager for Craftmark Homes at the Crest of Alexandria.

“Townhouses with elevators may be a significant part of the mix of housing in some markets, but it’s not a widespread trend,” says Paul Emrath, vice president for survey and housing policy research at the National Association of Home Builders. “There’s a small share of people who want age-restricted townhouses with elevators nationally, but it’s an important niche in some areas.”

Townhouses tend to be found in 55-plus developments in high-cost areas where land is scarce and there’s a tendency to build vertically for all types of communities, not just age-restricted ones.

Emrath says most older people remain in the neighborhoods near where they have lived, such as the Hardens. If they’re used to townhouses, they’re more likely to be open to one in an active-adult development. 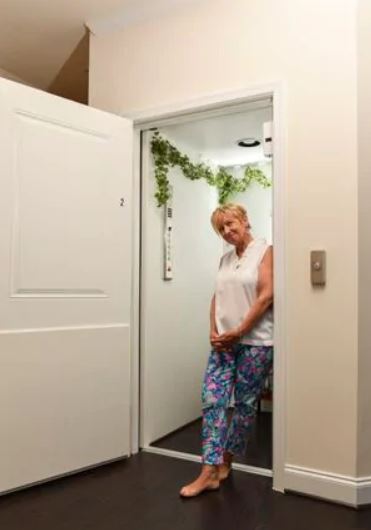 Janet Lynd, a resident at the Lifts at Birchwood at Brambleton in Ashburn, Va., wasn’t looking for a townhouse when she found her four-story one.

“I wanted an active-adult community, especially a new one that wasn’t already established, for the social life,” Lynd says. “I love having an elevator, even though I mostly just put my groceries in it and meet it on my kitchen level.”

The primary benefit of an elevator is that homeowners can age-in-place without worrying about their future agility.

“Our home buyers may not need or want ‘no-stair’ living in their mid-50s when they originally purchase in an active-adult community, but as they age and mobility becomes a factor, the elevator is a ‘future-proof’ feature that alleviates a move to another home,” says Kim Ambrose, vice president of marketing at Miller & Smith.

Lynd was also grateful for the elevator when she injured her knee and used the elevator for a few weeks until she recovered. Her 2,100-square-foot townhouse has a lower-level media room where her sons can watch football when they visit, a kitchen and living area on the second floor, and two more levels with three bedrooms and two bathrooms.

The addition of an elevator typically costs $20,000 to $25,000, says Mike Sandkuhler, vice president of building operations at Van Metre.

The cost is a prime reason they are less common in areas with lower housing costs.

“The challenge of building a townhouse with an elevator is accessibility,” Sandkuhler says. “The elevator provides accessibility inside the house, but you also have to make sure that the front entrance and the garage entrance are flat, with no steps leading into the unit. That means you need flat ground, too.”

Townhouses with elevators tend to be larger than many condos or one-story, single-family houses in active-adult communities.

“You need extra space to accommodate the elevator and yet still have enough closets and large enough rooms,” Sandkuhler says. 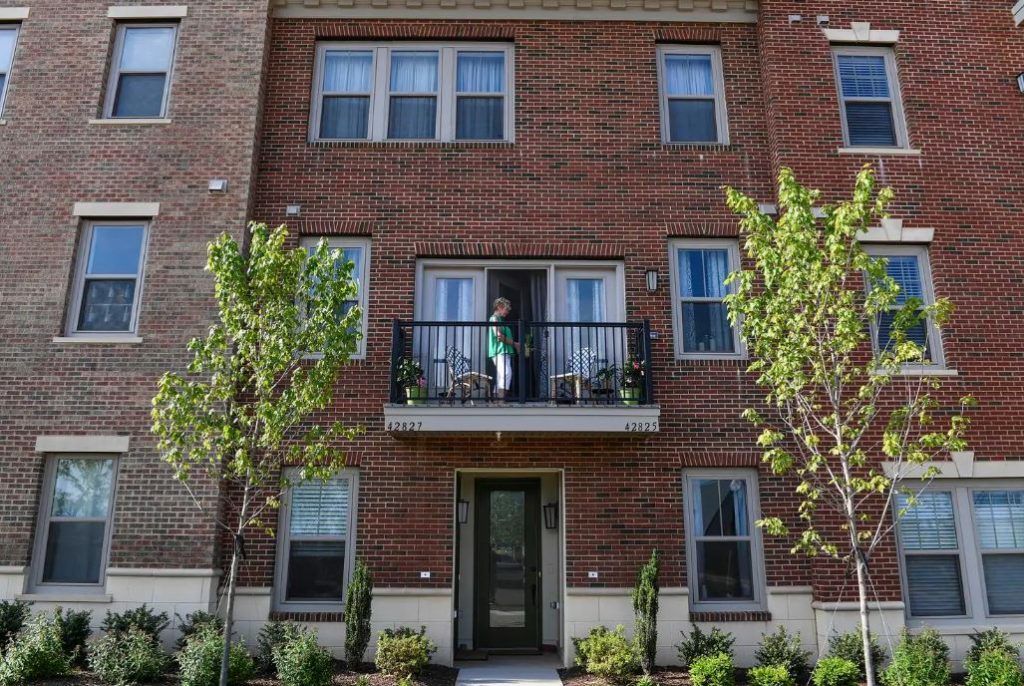 Janet Lynd stands on the balcony of her home. “I wanted an active-adult community, especially a new one that wasn’t already established, for the social life,” Lynd says. (Ricky Carioti/The Washington Post)

The Harden’s townhouse has more than 3,000 square feet.

In the Washington area, land is limited and expensive. Townhouses give you more bang for the buck because you can fit more of them on the available land, Sandkuhler says.

“Three-level elevator townhouses definitely allow for a higher density neighborhood than a villa-style home,” Ambrose says. “It also allows for more open space around the homes which the homeowner association maintains, whereas a villa-style home has more land located on the individual’s homesite.”

Lynd was looking for a home where she wouldn’t have to do yardwork or any outdoor maintenance. While most active-adult communities provide lawn care and snow removal, sometimes homeowners need to maintain the landscaping in their yard.

Townhouses make it possible to build more active-adult communities in neighborhoods close to the city.

“Most of our buyers have kids who live in D.C., Arlington or Alexandria, and they want to be near them so that every visit doesn’t have to be an event,” Windsor says. “If they live in Ashburn or farther away, they would have to drive at night and drive in a lot of traffic just to meet for dinner.”

Many of the buyers at Miller & Smith’s Walhaven neighborhood in Kingstowne are already residents of the surrounding neighborhoods.

“They want a lower maintenance lifestyle but don’t want to leave their friends and family,” Ambrose says.

Higher-density construction also makes it easier for residents to live within walking distance of amenities surrounding their communities.

“In our surveys, older buyers tell us they like to be near retail, so clustering houses and townhouses can get you closer to shops, services and restaurants,” Emrath says.

A townhouse doesn’t appeal to every buyer. Although she has a mudroom, a coat closet and plenty of closet space in her bedrooms, Lynd misses having a basement and an attic for storage.

One other drawback for some buyers is that the living spaces are spread over three or four levels rather than just one, Ambrose says.

But some buyers like that aspect so they have space for grandchildren to play or watch a movie while the adults gather on another level.

“A townhouse maximizes your living space,” Windsor says. “For retirees, it’s great to have separate space, too. They can use the extra bedrooms as offices or as a place where one person can read while someone watches TV in another room.”

Some of the buyers at the Crest of Alexandria moved from condos in other communities into a townhouse, Windsor says, because they didn’t like living in an apartment with neighbors on all sides.

Most of all, Windsor says, buyers like the idea of the elevator, which functions as a “bell boy” for their luggage and groceries.

“Seventy percent of our buyers travel often, so it’s great to have the ability to pack and then send the luggage down to the garage and not carry it on the stairs,” Windsor says.

Plus, there’s the cool factor when you tell your friends and family you have a private elevator, once an amenity reserved only for the ultrawealthy.